Imagine for a second you’re a big bass, just hanging out on a deep water weed line. You’re not particularly hungry, as you’ve got an ample baitfish supply and fed well earlier in the morning. All of a sudden, something peaks your interest – it’s a large gizzard shad (or a big bait) swimming by, seemingly injured.

Do you strike it? Or do you let it swim by?

On one hand, you’re not particularly hungry, so you would be fine letting it swim. However, you didn’t get to be a big bass by passing up easy meals – and at 7 or 8 inches, a gizzard shad will provide enough energy to really last…

Although a bit satirical, situations like these are every day occurrences for bass. Unlike us, they don’t have a supermarket available to them 24/7/365. If they want to eat, they’ve got to do it themselves.

For that reason, bass (and most wild creatures) are extremely opportunistic when feeding, and will seldom turn down a big, energy packed meal if it’s right in their face. This is the reason why big baits are becoming increasingly popular – even in parts of the country not known for giant bass.

If you replaced the big gizzard shad in the above story with a small baitfish, would it have changed the reaction?

Probably so, as the caloric reward for the meal wouldn’t necessarily be enough to justify the chase – particularly since the bass wasn’t actively feeding.

The theory behind big bait fishing is that in order to catch big bass – you need to show big bass something that interests them enough to strike, regardless of whether they’re actively feeding or not.

Despite its popularity, “big bait” angling doesn’t come with a user’s guide, and the tools and techniques can be downright confusing to the novice angler.

For that reason, we’ve put together the following guide to four common “big baits” – and how to rig and throw them.

The original “big bait” – swimbaits have become such a diverse category that it’s hard to lump them all into one. However, in this context we’re talking about larger, paddle-tail baits (hard or soft) that are designed to imitate a large gizzard shad, stocker trout, or hitch. Popular brands include Huddleston Deluxe, Triton Mike’s Bull Shad, the Spro BBZ series, or the – Optimum/Osprey series of line-though and top hook swimbaits – in large 6-10 inch sizes.

The ideal swimbait rod will be long (at least 7 foot 4 inches), heavy duty, and have a sensitive tip. For 6-7 inch baits that weigh between 1 and 2 ounces, you can probably get away with repurposing a flipping stick, but for the heavier stuff – up to 5 ounces, you’ll need a custom purpose stick. Most die-hards rely on something in the 7 foot 6 inch or 8 foot range, with an extra heavy power and a long enough handle to get good leverage while working the bait. For reels, use a low-gear ratio (5.4:1) high capacity reel spooled with either 50-60 pound braid (for braid lovers) or 20-30 pound monofilament or fluorocarbon. Some swimbait anglers swear by braid for its lack of stretch, and other think it costs them fish by ripping too big of holes in bass mouths – so experiment and choose what you prefer.

Swimbaits are designed to do just that, “swim” so they are best utilized in places where bass would encounter large prey fish in a natural setting. Structures like deep weed lines, points, humps, and ledges are all ideal. Concentrate on learning how to keep you r chosen bait at specific depths, and try to visualize where on the structure your bait is during the entire retrieve.

A relatively new category, glide baits are large, hard plastic jointed swimbaits designed to “glide” from side to side on a steady retrieve – and they’re the hottest thing since sliced bread across much of the country. Top choices include the River2Sea S-Waver, the Deps Slide Swimmer, and the ABT Lures Suicide Glide.

Glide baits work a pretty wide path, and for that reason most anglers use some type of monofilament, copolymer, or fluorocarbon, rather than braid. For 5-6 inch baits, opt for 17-20 pound line, and for larger baits, don’t be afraid to go up to 30. For reels and rods, the same type of rods that work well for swimbaits work well for glide baits – just make sure to match the rod to the weight of the lure.

To get a big bait glide bait to work, all you need to do is steadily retrieve it, and it will automatically do its thing. Once you’ve caught a few fish, though, the opportunities are endless. Experienced glide baiters will routinely work in pauses, twitches, pops, and jerks to make the action more enticing. Glide baits excel in pressured situations, in clear water, and any time the bass are feeding up. Something about their erratic “glide” just draws strikes when nothing else will – including other big baits. Gliders are quickly becoming legendary in their reputation for strike drawing, even from smaller bass – so don’t be afraid to throw one under just about any circumstances possible.

We’ve come a long way from the days of the old Johnson Silver Minnow… Giant spoons have become standard equipment for most anglers in the Tennessee River ledge fishing community, and they’ve already been responsible for a number of top tournament finishes in the highest levels of the sport. The Nichols “Ben Parker” magnum spoon was the original – but there are now several companies making spoons up to 9 inches and a full 3 ounces. They work by simulating a large gizzard shad in its final death throes – and can often trigger a reaction strike that fires up a massive offshore school of bass.

Big bait spoons should be fished on stout tackle, with heavy action swimbait rods getting the call from most anglers. Reels should be super-high speed, to catch up with fish that bite on slack line, and line choices are most commonly 20-30 pound mono or fluorocarbon.

To catch bass on a big spoon, it’s all about the fall. Make a long cast, and free spool the reel so it falls vertically to the bottom on or past the structure you want to fish. Once it hits bottom, engage the reel and “rip” your rod tip to 12 o’clock, then allow the bait to fall on slack line while following it down with your rod tip. Most bites occur on the fall, so watch your line for tics, and set the hook hard. Repeat the “hops” all the way back to the boat.

Another “big bait” invention of the ledge fisherman is the bucktail jig – a repurposing of a saltwater and striped bass bait, just recently applied to bass fishing. The bucktail jig is just that – a one or more ounce lead head jig with a long, 6-8 inch piece of bucktail or feathers tied to it, creating the profile of a large shad or baitfish.

Because they’re so streamlined, you can work a bucktail jig like the Wahoo Super Striper on lighter equipment than many of the other “big baits” on this list. Repurpose a flipping stick, or pick up any other long rod that’s heavy enough to handle a 1 or 1 ½ ounce lure. Reels should be super high speed (to deal with fish running towards the boat), and spooled with heavy (17-20) pound fluorocarbon or copolymer.

Fish a bucktail jig just like you would a flutter spoon – by stroking it hard off the bottom, and letting it fall back on semi-slack line. You really can’t work it wrong though, as there are times when offshore bass will eat them when just wound steadily back to the boat.

No votes so far! Be the first to rate this post.

We are sorry that this post was not useful for you! 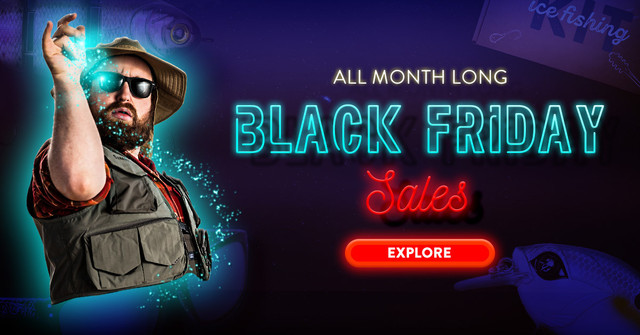